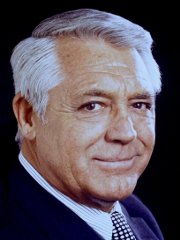 ©
I pretended to be somebody I wanted to be and I finally became that person. Or he became me. Or we met at some point.
2

©
I've never been a joiner or a member of any particular social set, but I've been privileged to be a part of Hollywood's most glorious era.
2

The most publicly seduced male [Cary Grant] the world has known.
1

Cary Grant is a great comedian, a great light comedian. He's very good-looking, but he's also very funny. That makes a devastating combination, and that's why he's been a star so long.
1