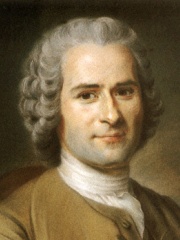 Nature never deceives us; it is we who deceive ourselves.
7

The strongest is never strong enough to be always the master, unless he transforms strength into right, and obedience into duty.
3

Virtue is a state of war, and to live in it we have always to combat with ourselves.
2

Man is born free, and everywhere he is in chains.
2

It is too difficult to think nobly when one thinks only of earning a living.
1